Cairns Turtle Rehabilitation Centre was established as a facility designed for treatment of ill and injured turtles in Far North Queensland and Cape York Peninsula. The centre works towards the recovery of threatened marine turtle species in conjunction with a local veterinary clinic. Since 2002, 21 turtles have been successfully rehabilitated and released in the region where they were found. Unfortunately 24 turtles have died during attempts at rehabilitation, a not unexpected result when considering the poor condition of these animals when brought into the centre. The majority of the stranded animals brought to the centre from Great Barrier Reef waters had ‘floaters disease’ with only one suffering from fibropapilloma virus. Qantas -Link Airlines has assisted in transport of turtles from the west coast of Cape York Peninsula where the Napranum Land Protection Unit rescued many stranded turtles. These have been injured due to entanglement in ‘ghost nets’. Injuries can be so severe that flippers have been lost or had to be amputated.
Donations Can be made at:
Marlin Coast Veterinary Surgery
Cnr Aropa St & Cook Hwy, Trinity Beach, QLD 4879
Phone: +61 (0)7 4057 6033 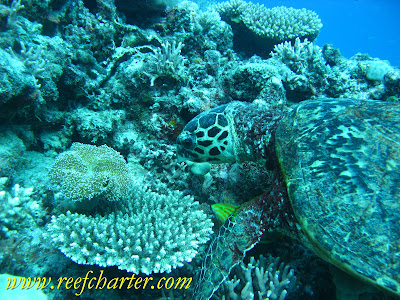 Adult Green Turtles are herbivorous. They almost-exclusively feed on various species of seagrasses and seaweed. While mature green turtles are entirely herbivorous, juveniles are known to eat a variety of marine invertebrates. Their diet of plant matter grows larger as they age, until as mature adults they become complete herbivores.
As large and well-protected animals, adult green turtles have few enemies and even fewer predators. Only human beings and the larger sharks are known to feed on the sea turtle. Tiger sharks are known predators of adult green turtles. Juvenile turtles and recently emerged hatchlings have significantly more predators, including sharks, crabs, small mammals and shorebirds. 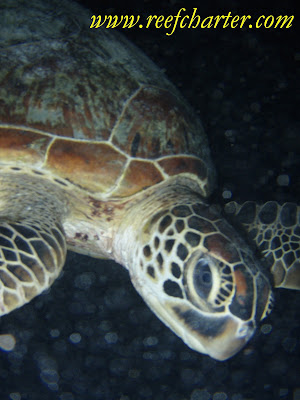 The green turtle is a common sight around the reefs of Cairns, lazily eating and swimming around the dive sites they make a peaceful presence to the fantastic underwater landscape.

Conservation Status – Internationally Endangered — World Conservation Union
Description – Adult green turtles have a smooth, high-domed carapace, are olive green in colour, with occasional brown, reddish-brown or black highlights. Hatchlings have a black carapace with white margins around the carapace, flippers and on the plastron. Green turtles have one pair of prefrontal scales between their eyes.
Threats to Survival – Threats to survival include incidental capture in fishing and shark control program gear, ingestion of synthetic materials, boat strike, predation of eggs or hatchlings at rookeries, incidental capture in dredges, Indigenous harvest of adults and eggs within Australia and overseas and increased incidence of disease (high incidence of fibropapillomas).
Distribution and Habitat – Green turtles are found in tropical, subtropical and temperate waters around the world and appear to be the most abundant of the six species of marine turtle found in the Great Barrier Reef World Heritage Area. They are found in subtidal and intertidal coral and rocky reefs and seagrass meadows of the continental shelf. Green turtles are principally herbivorous as adults, eating mostly algae, seagrass, mangrove fruit and jellyfish.
The proportion of a green turtle population that nests each year is highly variable (up to an order of magnitude difference) and is influenced by variations in the El Nino Southern Oscillation (ENSO) Index. Green turtles are the species of marine turtle for which this correlation has been shown and it may be based upon nutrition.
For green turtles nesting and foraging in the Great Barrier Reef World Heritage Area, tag returns indicate migration to Indonesia, Gulf of Carpentaria, Arnhem Land, Torres Strait, Papua New Guinea, the Solomon Islands, Vanuatu and New Caledonia.
Breeding Areas
There is low density nesting on many islands and along the Queensland coastline. Although genetically distinct nesting aggregations are known, the stocks often occur in the same foraging habitat.

Today our guests were treated to two great events in the marine calendar on the great barrier reef, the whale migration and two turtles mating. The latter event happened just metres from the boat and was a great educational experience for all.