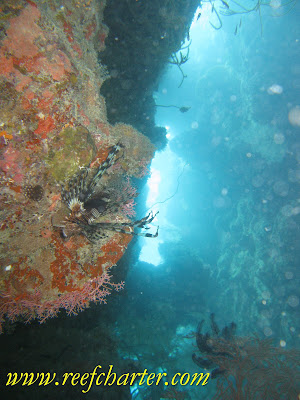 The lionfish blends very well into it’s environment. The photo above was taken by one of our guests, Hans Knudsen, trying to capture the ravine and beautiful fans. He was surprised to see a lion fish in the front right of the picture when he got home and looked at his photos from the trip.

A Lionfish is any of several species of venomous but not aggressive marine fish in the genera Pterois, Parapterois, Brachypterois, Ebosia or Dendrochirus, of the family Scorpaenidae. The lionfish is also known as the Turkey Fish, Dragon Fish, Scorpion or Fire Fish. They are notable for their extremely long and separated spines, and have a generally striped appearance, red, green, navy green, brown, orange, yellow, black, maroon, or white.
The lionfish is native to the tropical Indo-Pacific region of the world, but various species can be found worldwide. Due to a recent introduction, the lionfish has recently been spotted in the warmer coral regions of the Eastern Atlantic Ocean and Caribbean Sea. Lionfish are an invasive species in the Atlantic Ocean and the Caribbean Sea regions. Successful breeding of the lionfish in captivity has not been reported. In early 2009, the Lionfish was spotted in the Florida Keys, seemingly increasing its range.
There are many types of lionfish that vary in size. The common lionfish generally reaches a size of 30-35cm, while smaller lionfish, like the Fuzzy Dwarf, are typically the size of a tennis ball, not including fins.
We encourage everyone (divers and fishermen) to be extremely cautious and avoid contact with the venomous spines of the lionfish. Although they are not deadly, they are very painful. Lionfish are not aggressive toward humans and will almost always keep their distance when given the opportunity, so they pose a relatively low risk.
The lionfish is one of the most venomous fish on the ocean bottom floor. Lionfish have venomous dorsal spines that are used purely for defense. When threatened, the fish often faces its attacker in a head-down posture which brings its spines to bear. However, a lionfish’s sting is usually not fatal to humans.
Lionfish are voracious predators. When hunting, they corner prey using their large fins and then use their quick reflexes to swallow the prey whole. In captivity, lionfish can be trained to eat frozen brine shrimp, mysis, and krill.
However the lionfish have very few natural predators, but the grouper and other lionfish have been found with lionfish remains in their stomachs. Below is a clearer picture of the lionfish out in the open on a small coral outcrop.
. 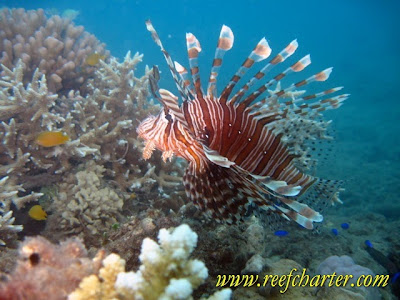 The tawny nurse shark or giant sleepy shark is found in the tropical Indo-Pacific oceans between latitudes 31° N and 24° S, and reaches a length of 3.2 m.

The tawny nurse shark is a large, bulky species with a small mouth and small comb-like teeth, and with angular fins. The caudal fin is short, much less than half the length of body, and there are no ridges on the side of the body. The pectoral fins are sickle-shaped, and the spiracles are much smaller than the eye.

It is found on continental and insular shelves, from the intertidal zone down to a depth of at least 70 m. It occurs on or near the bottom in lagoons or along the outer edges of coral and rocky reefs, sandy areas near reefs and off sandy beaches. Primarily nocturnal, but may be active during the day. It prefers crevices and caves on reefs but may be found hiding in more exposed areas, forming resting aggregations, and often seen piled across or on top of one another.

It feeds on a wide variety of bottom invertebrates, small fish, crustaceans and sea urchins. It has a docile nature and has been known to allow itself to be touched, but as always it is best not to touch creatures in the wild.

Reproduction is ovoviviparous (producing eggs that are hatched within the body, so that the young are born alive but without placental attachment.) with 4 or more pups being born per litter. It survives in captivity.

The flesh is marketed fresh and dried-salted, the fins dried for the oriental sharkfin trade, and the liver is processed for vitamins and oil. The offal is processed for fishmeal, and the hide is potentially valuable for leather.

Colouration is brown dorsally, paler ventrally, with the fins slightly dusky. Nebrius ferrugineus, is a nurse shark in the family Ginglymostomatidae, the only member of the genus Nebrius. 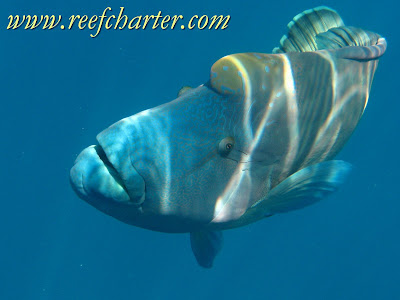 The Humphead, Maori or Napoleon wrasse, is widely distributed across the reefs of the Indo-Pacific and a favourite of our guests. A big fish with a bigger personality, the Maori Wrasse as it is more commonly know here is Australia is an endangered species and is now protected. It has two complimentary traits that do not combine well for survival, it is a very friendly and personable fish and it is a good tasting fish. This species is a very important part of the ecology of the reef as it is one of the few fish that eats sea hares, boxfish or the crown of thorns starfish.
With the current protection offered on the Great Barrier Reef we are starting to see the numbers of this fish increase. They are regulars at our dive sites at almost every reef now.
This first photo is taken at Thetford Reef by myself and the second was taken by one of our honeymooning guests Olga at the Pinnacles at Milln Reef.