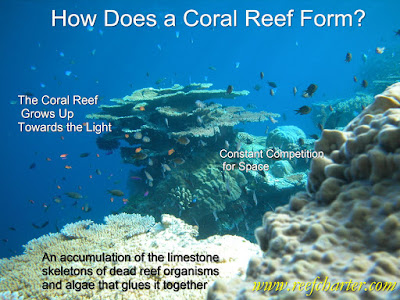 We even have a picture with labels today, don’t get used to it. This is courtesy of Fiona please see the credits below.

A coral reef is an accumulation of the limestone skeletons of dead reef organisms and the algae that glues them together.

The coral reef builds upwards, growing towards the light much like trees in a rainforest, competing for space and light. Once the coral reef reaches sea level it cannot survive the harsh surface conditions so begins to grow outwards. Creating spectacular formations of coral that spawn further growth and spreading of the reef ecosystem.

Through time, animals grow and the sand, rubble and debris of life is broken down by waves and eroding animals, such as worms and sponges. A complex reef ecosystem is built over time. Today’s underwater gullies and caves were formed because of that erosion. These are the same formations scuba divers enjoy exploring today because they are shelters for an abundance of marine life.

Coral reefs tend to grow where there is a lot of water movement, bringing nutrients, oxygen and new species. Most reef-building corals cannot grow in waters shallow enough to expose them at high tide or deeper than 50 metres, making them highly sensitive to changing sea levels.

The Reef is continually evolving and changing as climate and sea levels change. Healthy, diverse reef ecosystems are more resilient, that is, they are able to adapt to change. The Great Barrier Reef Marine Park Authority is concentrating on maximising reef resilience through research and management. 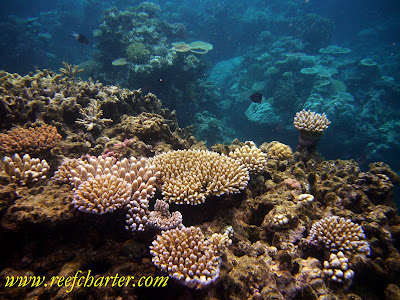 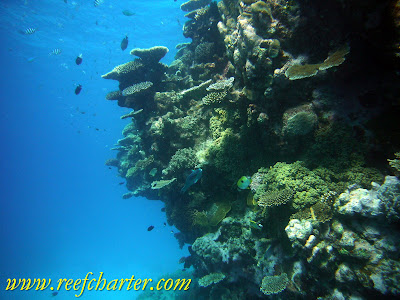 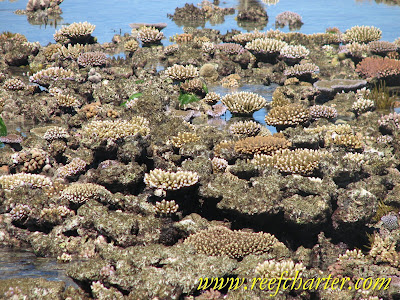 Understanding the reef and the ecosystem that it is part of brings a much better fulfillment to each dive or snorkel that you partake in.  Every reef is slightly different and the marine life and coral formations can vary a great deal with reefs just a few miles apart. Going with an operator that knows the reef and the ecosystem is a definite pre-requisite to getting the most out of every time you hit the water. 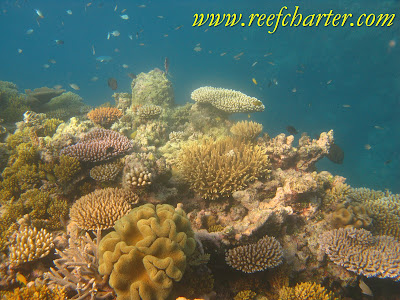 A basic understanding the life-cycle of a coral reef helps you understand what you are seeing take place in front of your eyes. Coral form in different ways in different parts of the world and each location may have it’s peculiarities due to tides, currents, temperatures and a myriad of other factors. So it is best to dive with a local expert and someone who cares about the reef that you are diving. There are plenty of predators and destructive forces that prey upon the corals that make up the beautiful underwater landscape. This is a natural part of the life-cycle of a reef and is why you will see parts that appear dead or like rubble. The healthier the reef, the higher the percentage of coverage of coral, however there always needs to be some areas that are not covered so new corals can take hold and grow as part of the reef. Much like a tree needs a break in the forest to get sunlight to grow, often a larger tree must die and fall for this to happen and the life-cycle to continue.
The fish, turtles, sharks, starfish, rays and other marine life that surround reefs are also part of the balanced ecosystem. Local knowledge and educated staff can tell you the role each of them play. Are they are predator? Do they eat algae? Do they eat the coral? Do they filter water? Each of them have their special place in the ecosystem. This balance needs to be maintained to keep the worlds’ reefs healthy and vibrant for the next generation. The healthier the reef the more resistant it is to any disease or adverse impact it may suffer. Feeding fish while it may make your dive or snorkel more exciting as after periods of time marine life will flock to the area, it upset the balance that the reef has taken generations to reach.
So on your next trip study a bit before you go and learn about the area and ecosystem you are about to visit.  You may even learn something the local expert has yet to discover. Then choose the tour carefully to make sure you get the most you can out of your experience.