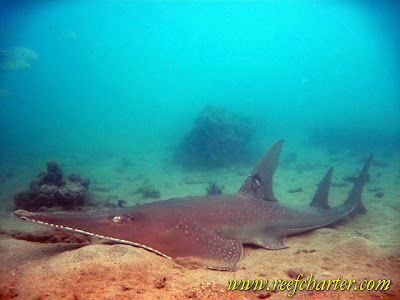 These rays are a great thrill when you get one that is remaining still enough for you to get a good look it. Our divers always remark and remember the encounter as one to remember for years to come.
There is no wondering how this fish got its name, its big wide flat head and the way it works its way across the sand clearly resemble a shovel. They are also known as the guitarfish. Looking like a cross between shark, ray and fish the shovelnose ray is something completely different.

The shovelnose ray eats small crustaceans and are therefore seen around the base of reefs and grassy sea beds. When not feeding they like other rays they tend to bury themselves in the sand. So when diving keeping a close eye out and paying close attention to your surroundings you may catch one of these guys chilling out in the sand. But stay away as they are timid creatures and will probably take off as soon as you approach, so just check them out from a distance.

The shovelnose ray gives birth to live young and often twins, yes two at a time. The young normally stay around the area of their birth until they mature and start to wander off and explore areas of their own. They can grow up to about 1.8m or 6ft and have about 65-70 rows of teeth. 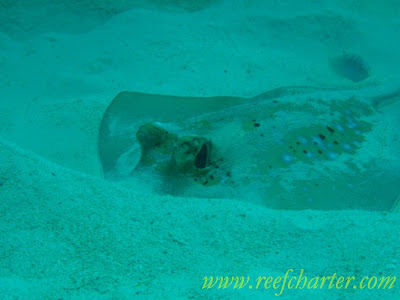 Another common site on the reef is the blue spotted ray. The blue spotted ray is found behind the reef face in the sandy bottom. It often buries itself in the sand, as seen above, so only its eyes appear above the surface of the sand. Being bottom feeders, their mouth is perfectly designed to scoop crabs, shrimp and fish. Instead of chewing its mouth is designed for a crushing motion rather then chewing before swallowing it’s meal.

The average blue spotted ray is about 30cm (12 inches) across the back. It is most commonly seen in depths ranging from about 6m – 20m. Sometime seen gracefully swimming over the coral beds on the reef as the photo below shows.

The male fertilizes the eggs inside the female where they remain, yes inside the eggs and inside the mother, until they hatch and she gives birth to live rays, known as pups. 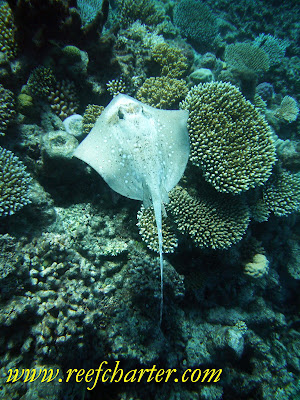